…but can they protect us from cybercrime?

A 2015 survey from Bain & Company showed that 38% of banking communications in Australia occurred via smartphone, and a further 35% through online banking.* Financial institutions depend on a digital presence to maintain their competitive edge, and are constantly adapting their online and mobile services to improve the user experience.**

It’s safe to say that digital fits our ‘on the go’ lives, as people don’t always want to talk to a person or hang around on hold if they can avoid it. So now with a few jabs of a touchscreen, we pay bills, make purchases, view financial statements and transfer large sums of money without a second thought.

It’s no surprise that cybercrime has followed us into the digital realm. Cyberespionage has evolved into a sophisticated network that generates billions of dollars each year.

For a lot us, the concept of cybercrime doesn’t go far beyond the scope of scam emails claiming we’ve won the lottery, or cold calls requesting our personal details. We protect our computers from viruses and malware. We’re careful with our PINs. But we don’t always stop to think about the digital security of our banks. They’re banks; they’re supposed to be secure.
The implication of a cyber security breach, most obviously, is financial loss. But there’s a domino effect. Customer trust begins to diminish, an organisation’s reputation comes into question and claims of negligence could soon follow.
The onslaught of digital activity in recent years means traditional security approaches aren’t as effective as they used to be. Cybersecurity is no longer just a problem for the IT department. It must be viewed as a business risk.
To tackle this new wave of cybercrime and advances in technology, a more rounded approach is required. There’s a need to move from a protective system to a proactive system. Security that moves beyond a reliance on firewalls, to being able to monitor and respond to active threats when and where they occur.
All businesses must follow the changing digital landscape to remain relevant. It’s not just about keeping up the competitive edge, but being able to do so in a safe and secure manner. The consequences of failing to do so could be disastrous.
*Source: Consumer behaviour and loyalty in retail banking, Bain & Company, 2015
**Source: Combating online financial fraud, InvestorDaily, May 2016

Why people ignore financial education – until they need it most

Money Mistakes and Lessons at Every Age and Stage 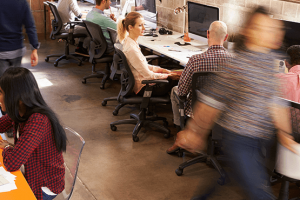